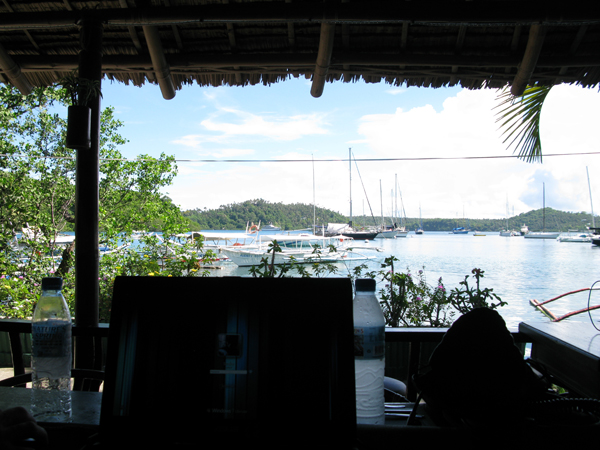 I’ve been in the Philippines for 6 months now, long enough to feel like I’ve got a bit of a grasp of the place.

Before I came, I had the stories and advice of David Hehenberger & Dan to go off, so I thought I was pretty well prepared. 6 months later, and I realize that I knew NOTHING then. Here’s the advice that I would have given to past-me before he arrived in this country:

Are you in a country that has good food options available? Are there loads of international food spots and high quality cuisine joints around every corner (Londoners, I’m thinking of you here)? Or maybe you’re used to cheap, awesome curries and satay’s at your nearest food market (for those in Thailand or Indonesia)?

If you’re leaving for the Philippines soon, hit one of those food spots right now and chow down like it was your last meal!

The Philippines sucks for food options. If you’re heading to Manila, Cebu or one of the other medium to large cities, the international chain food places are OK but nothing you cant get at home, and for a country in the middle of SE Asia it is amazing how bad the food is in the Philippines compared to neighboring countries.

If you’re OK with greasy meat (greasy everything, honestly), ridiculous amounts of rice, lack of decent vegetable dishes and copious amounts of sugar in meals that should only have a pinch – you’ll like the food here. If not, budget extra to eat at the chain and international food spots. Eating at the canteens, as they’re called here, on the roadside will be cheap but not enjoyable at all.

This obviously doesn’t apply if you’re living out in the mountains or in a secluded beach hut away from modern civilization (which you can do here), but in most of the cities clothes shopping is surprisingly cheap and there is a good selection of brands and materials available.

This was a bit of a shock to me after visiting my first mall (SM malls are scattered all over this island nation) and walking into an Adidas, timberland and even a north face shop and being surprised at how much was available and how reasonable the prices were compared to the UK. Consider leaving a few key purchases off of your shopping list and buying them here instead, or just rest easy knowing you can replace your Vibram five fingers without too much hassle once the stank hits them.

A young guy I met in Manila wouldn’t stop bragging about his custom tailored wool trousers. He found the material at a market and took it to a tailor he found online in Manila, 2 days later he had a swanky pair of wool trousers (they just looked like black jeans), that he then told me he hadn’t washed for 3 months because the material was so durable. He says durable, I say nasty. But consider getting some suits, trousers, blazers and other custom clothing tailored here to save a few hundred bucks on what you might pay at home.

The Philippines is heaven for any foreign man under the age of 40 (or over, but young westerners especially are like unicorns here) who wants to party and drink himself into an early grave. This is one of those things you don’t really appreciate (or despise, whatever) until you get here.

At first, I thought this was great. 6 months on, I’m tired of it and feel like I need to go on a detox or something.

Why is this country so much fun? Well to generalize, the people here are just pretty. And there’s all different kinds of pretty. Beautiful, sexy, handsome, cute… the Philippines has it all. This is of course subjective, but the skin tone, expressiveness, bone structure, body types and smiles of Filipinos is something else. And ladies I’m not just talking about the women here, the men are a handsome bunch too. Hetro-handsome, like Prince 😉

Staring out the window of my Taxi on the way home last week, I realized that this constant surrounding of beautiful people releases some kind of toxin in the brains of unwitting foreigners, it’s like being in a nightclub full of pretty folks who are all actually friendly (this is the anti-thesis of western nightclubs). And that’s the other thing…

As a foreign man in this country, you are kind of treated how I imagine a rock star would be treated on a day to day basis. First of all you are different from the norm here, you could even say “exotic”. Second of all you are perceived to be rich by pretty much everyone, and to be honest if you are coming from a western country then at some point in your life you probably have been a lot richer then a large majority of the population here. There are all sorts of by-products of this combination: from friendly stares from nearly everyone as you walk down the street to the seemingly magical ability to converse with anyone and every one.

Take this ‘soft-rock star’ concept to a bar or club here, throw in 50 peso bottles of beer and you have some of the craziest nights out you will ever experience.

I could write about the partying in the Philippines for hours, it’s truly something else. But realize that your health, productivity (especially if you’re trying to start a business or career here in the Philippines) and possibly your outlook on life are all at risk of coming second place to the party lifestyle here if you let it. If you want to stay here long-term, you will need to make ‘balance’ as it applies to lifestyle one of your priorities. You also can’t let it go to your head, but that’s another post.

If you’re coming from the west, and you aren’t used to seeing poverty all around you every day, the Philippines will take some getting used to.

This is something that you will find in many parts of Asia, and has a load of moral elements involved (obligation, feelings of helplessness, wether you should give that 6 year old child following you 20 pesos or not) that I don’t want to get into here – but you really have to thicken your skin to it if your going to get by.

You can bubble yourself away from it if you really try, but I almost feel like you would be doing yourself a dis-service. Accept that you are living in a country where the majority of people are poor, forget the fact and start getting to know some people. Who knows, you might figure out a a way that you can help

Does It Sound Like I’m Ragging On The Phils?

I wanted this to be a more realistic view of life in the Philippines for an expat or someone planning a long to medium term stay. Not another “cool waterfalls to check out in Palawan” guide for backpackers.

Saying that, there are some huge upsides to living in the Philippines, especially for someone trying to cut their US or European living costs in order to build a business or career and re-invest into it, rather then buying a new 3 series so you don’t feel out of place at the neighbors BBQ:

The Philippines is only just starting to make sense to me, and I’m sure I will be sharing more content about SE Asia’s secret playground in future. I’d love to hear your own thoughts on the Philippines in the comments below!