“You are the sovereign authority for your life. You are the ruler who makes the decisions regarding how you will act, what information you will accept. You do it anyway — but if you recognize that you do it, you can gain much greater control over your future.”

“Would you spend a year in jail if you received 1 million dollars when you got out?” He asked me.

My response came with no hesitation, as if the answer was organic, from the soul: “You damn right I would!”

This answer seemed to make my old friend mad; I have a tattoo on my back that reads “freedom” in Thai and he couldn’t understand how I claimed to represent a concept that I’d be willing to give up so haphazardly.

My friends frustrations went unanswered as I began imagining how much of a cakewalk one year in prison could be.

I’d make a bunch of progress on my reading list, with no distractions like game consoles and new Medium articles to distract from the more difficult books to get through like War & Peace.

I’d develop those calisthenics skills I’ve always wanted, work 12 hours a day on hand stand push-ups and pray for access to a punching bag & skipping rope to make strides in my footwork. Daily meditation would be forced upon me. I’d come out mentally (and hopefully physically) stronger then ever! Plus a year is a long time to develop ideas that I’d then have $1mil to spend testing when I got out.

Of course there’s the 24/7 threat of harm and possibly death from other inmates (and guards?) who truly thrive on being locked up with borderline-psychopaths and navigating a testosterone fueled Darwinian playground, but who thinks of contrasting view points when justifying anything!?

This conversation made me rethink what freedom really is.

The recent events in Feguson exposing the genuine injustice and lack of real freedom for a large proportion of black people living in America gets my pulse rising in anger. “Freedom is a basic human right” I mutter to myself after angrily watching another video of police officers abusing their positions (and the trust of the very people who are supposed to have put them in those positions).

Is freedom something we all deserve from birth? Or do we have to earn it? Do we give it away without really realizing it and does anyone have the right to define freedom for us? To answer the question, we must truly understand what freedom really is. 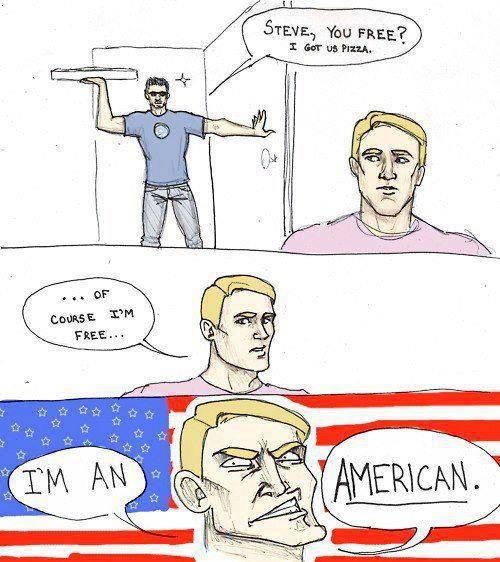 Dictionary
The dictionary definition of freedom is “the power or right to act, speak, or think as one wants.”

That’s open to interpretation depending on the angle you approach it from. Some would argue that complete freedom, of the type described above, leads to anarchy. A good analogy for this is the goldfish fable (best told on a very random reddit post):

“A goldfish bowl lies on the table. Observe what happens to the fish when we “free it” from its external restraints, of having to be bound to water.

Look at it. See how the fish flips and struggles, fighting for motion and direction. The gills stretch and quiver for the refreshment of oxygen. Note how its muscles convulse, as the fish battles against its slow and agonizing suffocation.

Before long, we see that it lies on the table—lifeless.

So I ask you again, What is “freedom”? Is this what freedom looks like? When the fish is “freed” from the constraints of inhabiting the water, its true freedom to move around and even breathe the breath of life itself is destroyed. The fish is not more free, it is less free, if it cannot honor the reality of its ordered nature.”

This is the justification that western society (through government, law and general acceptance by the people) uses in creating and enforcing restrictions: that freedom is not found in the absence of restrictions, but instead in finding the right restrictions that are conducive to human flourishing and the broader common good of the human race.

Harry Browne
One of my favorite books is Harry Browne’s How I Found Freedom in an Unfree World, which is packed full of excellent philosophical observations about the state of modern ‘freedom’.

Browne defines freedom as living your life as you want to live it. He highlights several ‘traps’ that get in the way of most people achieving freedom:

Hoping to be free, many people engage in continual social combat — joining movements, urging political action, writing letters to editors and Congressmen, trying to educate people. They hope that someday it will all prove to have been worthwhile.

But as the years go by they see little overall change. Small victories are won; defeats set them back. The world seems to continue on its path to wherever it’s going. Until they die, the hopeful remain just as enslaved as they’ve always been.

The plans, the movements, the crusades — none of these things has worked. And so the unfree man continues to dream, to condemn, and to remain where he is.

Check out this great summary of Harry Browne’s book for more insight into the ‘assumption’ traps that limit freedom.

My Own Definition
I define freedom as the absolute removal of limitations. This means that freedom must be directional, as removal of all limitations is physically impossible (gravity is a limitation, as is our genetic makeup).

The biggest difference in my outlook is that I see freedom as physical and entirely mental concept.

My civil freedom can be taken away if I’m put in jail, but my mental and spiritual freedom is still absolute. That’s why I could never join the army, step 1 of the army playbook seems to be to infiltrate the mental freedom of it’s soldiers and rebuild it with an externally defined framework. Maybe it works well for some, but a reality where I don’t fundamentally control my own mind is not much of a reality (you can switch out “join the army” with “watch TV”, “follow daily news” and “group thinking”).

The quote at the top of this article from Harry Browne’s book says it well, “You are the sovereign authority for your life” and further, your mind. Freedom is yours to define, ignore, outsource or embrace as you see fit. We all have freedom to define our own freedom.

“But whether or not you accept it, you are sovereign. You rule one life — and you rule it totally.

To be free, you have only to make the decision to be free. Freedom is waiting for you — anytime you’re ready for it.”