I’ve been training Muay Thai here in Thailand for the past 4-5 months. The schedules have changed but I’ve been pretty consistent in training every day for at least 2 hours (now I train 3 hours every morning, last month I was destroying myself with a 2 hours in the morning, 2 hours in the afternoon schedule), with a day off every Sunday. I have at least two professional fights scheduled for the next 2 months, and I’ve lost near 20kg in weight and improved my health drastically in preparation.

You can see my Muay Thai teacher/’ajarn’ in the picture above, his name is Sen and he is the calmest, clearest thinking man I have ever met. It’s hard to look him in the eyes if you’re tired or unprepared, as it feels like he can see into your soul. He has a very impressive Muay Thai track record, with several world champion titles and nearly 400 fights to his name; not that he would ever bring them up unless you specifically ask.

He goes hunting near his home from time-to-time, returning with snakes and other animals he catches in self-made traps that he cooks up for his wife. I’ve seen him jump into a bush and catch a chameleon (those in hotter climates will appreciate how fast lizards move) in his hands, show it to me and then let it free – just because he could!

In short, he’s an extremely dangerous Muay Thai fighter, a man in tune with nature and an excellent teacher.

Here’s just a few things ajarn Sen has taught me since he started training me in Muay Thai and became a true friend:

“First You Must Beat Yourself, Then You Can Beat Others”

This one keeps me going after 2 hours of training and full contact sparring sessions or similar; if you can’t ignore that little voice in your head telling you to quit and give up when it gets hard, how can you expect to ever win a fight against anyone else.

This one really vibes with my approach to life, if I’m a mess and in a bad head space, how can I ever expect to attract sharp thinkers and the people I need around me to improve. Even worse, if by some stroke of luck I do meet the right people, dragging them into my mess is placing a burden on them and destroying future opportunities.

Getting your head/life/business/health in order is your duty, it’s almost disrespectful of others to impact their lives while yours is in shards.

“No Friends In The Ring”

You’ve just finished your second round of sparring with your training partner, adrenaline is high and anger + the bodys natural response to agression and blows to the head/body can cause people to act without thinking. The last thing you do is drop your hands and raise your chin when your teacher calls an end to the round – trust me it’s an easy way to get punched in the jaw and it will be no-one’s fault but yours.

I don’t agree with a lot of UFC fighters “I don’t care I’m going to kill him” attitudes you see on TV, but I do believe that when you step in the ring/cage/gym you are there to become as efficient as possible at hurting people. You will improve as a person and athlete in the process, but the ultimate goal is that brutal truth. When around others in the same situation, have fun but realise that you have to protect yourself at all times. I’d rather raise my hands in a blocking motion when my friend is trying to demonstrate an elbow move, looking a bit paranoid or scared then get a cut on my face because my friend demonstrates a little too hard.

It’s the same in life really; have fun, fall in love, live it up with your friends, give everything you have to your business… but always protect YOURSELF. That doesn’t mean hide from danger and risk or put up social walls, it just means stay true to yourself. If you listen to your heart when it comes to making decisions, you are staying true, simple as. 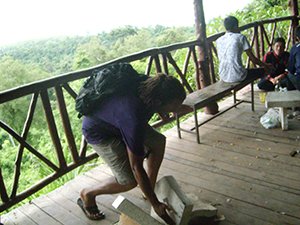 This is a favourite quote of boxers and martial art heads all over, because it’s ridiculously true. My trainer prepares me for the 5 minute rounds of a real Muay Thai fight by making me complete 7-10 minute rounds during training. 8 minutes of exhaustion on the pads makes for a well-paced and energetic 5 minute round during a sparring session/fight.

This is something I’m trying to apply to my day-to-day, starting projects and producing as if my financial future depended on it. This blog is an example, I started this site originally to improve my writing skills – in the process it has become a network booster for me. If I did not take this site seriously from the beginning, I would not have made half the connections I have and I wouldn’t have a small backlog of content to use as my body of work. The challenge is now multiplying this philosophy and ‘creating’ a lot in other areas of my life.

Muay Thai, broken down to its basic concept, is a competition of controlled agression. You kic me in the side? OK! I will kick you in the head even harer. Even the kids (who fight from as early as 4-5 years old) show no pain in the ring. If I show pain, I am giving you a strategic hint on what part of my body to attack and also giving you a psychological boost knowing that I have been ‘dominated’ in some way.

I believe that this ties into the Thai concept of face, where to look weak or out classed, even for a moment, causes deep shame.

Tired at the end of a round, leg in pain after accidentally striking a knee or elbow, or just gasping for breath… you better keep that pain inside or find yourself getting jumped on by your opponent.

It’s like the way a lot of families deal with problems, sort it out amongst themselves and keep ‘outsiders’ in the dark. In smaller, gossipy communities this can actually be a good idea – it gives the critics and nasty gossipers nothing to talk about and stops other people from being dragged into family issues (which are often petty anyways).

Here are a few things that watching and reflecting on the actions of my Muay Thai teacher has taught me:

Respect
If you watch a professional Muay Thai fight at Lumpinee stadium in Bangkok or in the middle of a remote field at 11 at night (guess how I spent my past weekend), you will see the fighters punching, kicking, kneeing and elbowing like you’d expect, but also smirking, performing and constantly showing a (sometimes small, sometimes large) level of respect or the other fighter.

Like I learnt, there are no friends in the ring, but Muay Thai and martial arts in general is about more then the fight. There’s a history, pride and slight reverence that comes with the sport. The Wai Khru, a form of dance performed by participants before a fight, is a show of respect to the fighters teacher. A lot of times there’s an element of cheekiness and mocking of the opposition to the wai khru as well, sort of like the Haka Maori rugby war dance performed by the all-blacks, but that’s all in good fun.

I wrote about respect on my Facebook page dedicted to learning the art of Muay Thai, FightJourney:

I like to think that I always show respect to my Ajarn, but more than that Muay Thai teaches you to respect yourself and others.

A sparring session for example, full contact or otherwise, is where you practice the movements and techniques you have learnt in a fight situation. Following quite a few hits to the head and torso – you learn to respect your opponent as much/even more so then you do yourself during these sessions.

Lack or respect for your opponent and their ability often leads to cocky and unclear thought, I have found. And nothing is more important than remaining calm and keeping your mind clear when fighting, it allows you to accept what is happening and then react or preemptively take action as needed. Similar, in a way, to meditation.

I have learned to respect myself and my body too. Nothing, I have learned, is more important than sleep if you don’t want to be suffering throughout training. I can eat well, stretch like an olympic athlete and talk all the big talk I want but if I haven’t slept properly the night before, there’s a 97% probability that I will have a bad training session. I’ll kick pads so lightly that my Ajarn will laugh at me or that niggling pain in my shins that I thought long gone will come back in full effect…

…The lesson here: respect yourself, respect others, and most importantly respect your Ajarn — that is if you don’t want him or her beating the respect out of you 😉

Be Consistent
Since I started training Muay Thai, I have given myself one requirement that as a bare minimum I have to stick to; that no matter what happens, I have to show up for every training session. Aside from a few sick/real problem days, I have mostly stuck to this.

It gets hard showing up for training when it’s raining (I’m talking tropical storm raining – not the drizzle you see in the UK) or when your whole body is aching after getting kicked several times the day before and the 5:30am alarm comes way too early. I’ve even called my trainers wife up 30 mins after training starts, telling her I woke up too late and there’s no point of me coming in. Her response, just show up.

I’ve now turned the process of waking up at 5:30am, rolling out of bed and running through the 10-15 minute routine of preparing my gear for training and hopping on the scooter to ride in, into a mindless set of steps that I can almost complete with my eyes closed. I can be a bit of a grumpy prick during this process to my housemate and training partner Nick, but god-dammit I show up!

Despite all of the techniques, movements, fitness levels and nutrition rules I am learning – the ability to consistently show up is the biggest achievement I’ve had so far from learning Muay Thai, and knowing that I can keep chipping away at something even when it gets hard is opening up my eyes to a new stream of opportunities, things I would never have even considered before because I couldn’t see myself sticking to it.

My Muay Thai instructor dosen’t say much, but when he does, he leaves a huge impression on me. I’ll try to keep listening and learning, and you know I’ll share his teachings with you here 🙂